The Slingshot is nearly compete and we have landed in Salida, Colorado on the Arkansas River and about 7000 feet above Tampa. The drive here was fine and we all listened to and discussed a wide array of music as we went round and round with each person picking a song from their devices in turn. This made for an engaging and entertaining drive. Salida was the destination because Sam’s family had a home here that for the moment was empty. It was in fact a nice modern three story which they rent out. 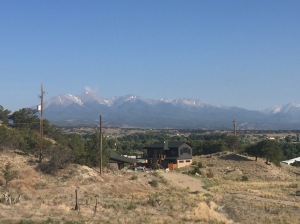 We quickly settled in and made use the chance to clean clothes and selves. For most of the drive we followed the ACA route. We loaded up with water bottles so that we could help hydrate anyone we saw. As it happens we saw very few cyclists. Even groups I knew were out there we did not see.

It was a mixed feeling to drive the stretch we were skipping over. Part of me feels bad for skipping the deserts and some of the harder climbs. But at the same time, most of me really does not care at all. We had a lot of soul searching and heartache when we made the call to turn back and there is no point in second guessing. What is more, seeing the temperatures reach as high as 107 in stretches of bone dry desert showed it was right to leap ahead. 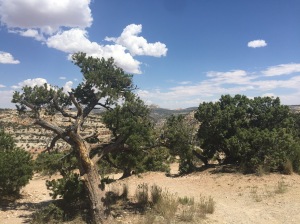 We came down into one valley in Colorado and it was the first time we saw flowing water since Dayton. The main groups I know of out there are supported. Indeed, I feel sure we would have been fine if we had a support truck with us. We heard that the solo guy we saw a few days earlier had been swept up by the Wounded Warriors’ party: he and his one water bottle will be fine. We also heard again and again that this was an unusual heat. So be it.

The only city on the route big enough to take the one way rental was Pueblo, so it is there we will return to riding on Monday. I would like to have returned to riding farther west, but there was no viable option. 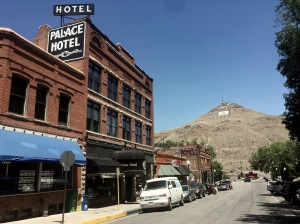 So, for now we are planted in Salida walking the streets, looking at art galleries and bike shops, watching kayakers on the Arkansas river, and hiding where we can. This is a sort of art festival this weekend so the streets are filled with mingling visitors, street musicians, and a gaggle of silver painted revelers.

I have not been able to shake a low level flu for about 4 days and it is getting on my nerves. On Friday I bought medication so here’s hoping. We are encamped at the edge of a farm on the edge of town. The couple who own the land welcome campers and have mowed out a few nice tent sites. Our’s is by a small river swollen with snow melt. One highlight is the friendly llama who pops by our camp now and again. 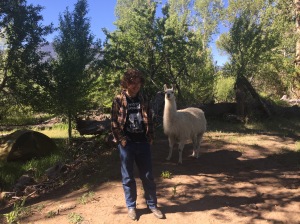 The wind is ferocious and constant and locals tell us that both the wind’s and water’s intensities are aborations. This land has always been known for its weather extremes, and road washouts and flooded rail bridges have been causing problems here since the third quarter of the nineteenth century. But these days, it is like the climate has gone mad and no one is safe. We are on the course of the Tour Divide–a long endurance cycling ride that takes riders from Canada down to the Mexican border along the continental divide. We have seen a few of the riders and they looked beaten. One guy in a roadside convenience was in good spirits, but was pretty worn. He was talking to another rider about the rumor that one of their number had been killed the week before. Great. I wonder if that was a source for our rumor. The stories move up and down the trail and get changed a bit on the way. I have seen the same thing on every tour or hike I have done. Usually talking with fellow travelers is a great way to gather info–this summer it is scary. The only self supported riders we saw on the Slingshot were a very nice and determined couple we met as they climbed to Austin. They told us that they had come upon a road accident a few miles back and it was pretty unpleasant. As we talked the wrecker passed us carrying the ruin–it was an SUV that rolled so badly it looked like a giant muddy beer can. Great. The good news is that the driver should be fine. We saw a Tour rider in a coffeeshop in Salida as well. she had a big ace wrap on her right leg and was icing her knee while she charged devices and studied maps. Everyone is having a hard time but soldiering on in their fashion.

The Tour Divide is not for the faint of heart. It is over 2700 miles long and mostly on back country trails. 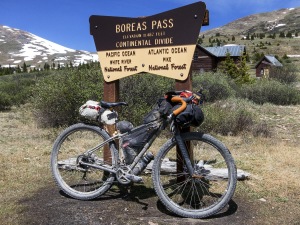 The kits the riders use are very different from the sort of road touring outfits we use. For one thing, we ride touring bikes which are in essence beefy road racing bikes designed to carry weight. Touring bikes also have longer chain stays than do road bikes. This creates a longer wheel base making for a stable platform–road bikes can be really twitchy. Yeah. I am missing my road bike. A touring bike’s longer chain stays also mean that a rider’s heels won’t slam into rear panniers. The supported groups we saw along the way were all on road bikes–made heavy by two (count ’em, two) water bottles, meaning they could ride light and fast up hill and down while we slogged along with fully loaded self-supporting dump trucks. The Tour Divide riders are all on mountain bikes The have suspension and are designed to take the knocks of dirt trails. In recent years here has been an explosion of “bikepacking” bags and sacks makes to fit onto the frames of mountain bikes and their endurance cousins. They are a sort of ultralight counterpoint to touring bikes. Our panniers mount to the side of our front and rear wheels, whereas bikepacker bags are designed to stay in line–thus the bikes have a very slim profile head on, but make use of all sorts of spaces and voids in the frame. The Tour riders and their bikes we saw were all muddy. It looks like a proper ordeal.

Tomorrow morning we will break camp and head down to Pueblo. The deal with the truck was that we had to keep it for a week or pay an early return fine. I dunno. Sam, Chester, and Xander headed out on Friday so they will be one or two days ahead of us when we set out after our Hertz enforced break. The downtime may be a blessing. More chance to drive this flu away. 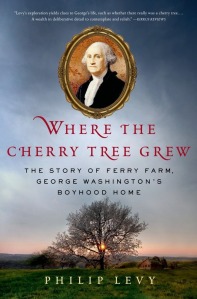