Today began very gray but cleared up. I got up early and rushed back to town to try to recover my glasses which I had left on a wall in the cemetery. The Shul was open when I got there, so I had the pleasure of saying shacharit (albeit alone) in the beautiful old Nidhai Israel shul. It is very much like a British shul with the same type of stying and pillars holding up the women’s gallery. One difference was that the Bimah (raised reader’s table) was in the back and not in the center. I am a big fan of facing bench seating in shuls–in my mind it plays down hierarchy in favor of communalism.

The Bimah in Nidhi Israel

This building dates to about 1831 when the great hurricane demolished much of older Barbados. This new shul sits on the foundations of the original which dated to the mid seventeenth century.

Some visitors came through and they must have thought that I was some sort of museum display set up for effect and authenticity. When I was done, Emerson, the tender, directed me to meet Benny Gilbert, a retired local property developer and one of the community’s elders. His wife is an Altman—one of the oldest Ashkenazi families on the island. Mr. Gilbert invited me back to his office for coffee and a chat and so we walked though the crowded Bridgetown streets having the kind of conversation one would have any where in the world after saying “shalom alechem – alechem shalom.” Mr. Gilbert had much to share about the island, its Jews, and his life as one of them. He explained that the original Spanish community was all but gone by the end of the 18c and that the Ashkenazim came in waves, many spending a few generations here and then fading away only to be replaced by new families. This was much the same as I had seen in some places in England—wandering, to paraphrase perhaps the most famous (sort of I guess) English Jew, Shylock, is the badge of all of our tribe.

The shul is on the left, and the mikveh newly built is on the right.

I returned to the Shul after my visit and got there in time to see that the guide had brought visitors in to see the mikveh. This 1650s bath was discovered archeologically a few years ago and once the stone rubble had been removed, the water returned. It requires no filtering—it is fresh, clear, and tapped into the water table. 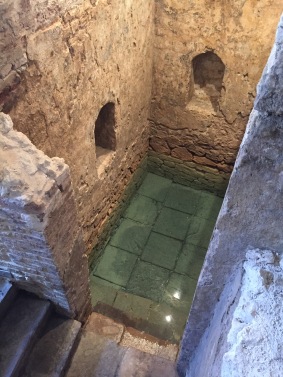 They have built a very lovely building over it from the removed stone rubble and it is quite a gem. I waited and listened to the talk about how the 17c Jews here used the mikveh—a description based largely on 17c travel narratives. The mikveh is not formally open to the public (vistors can look in with the guide), but religious exceptions are made from time to time. A few weeks ago a pair visiting Chabniks went in and today it was my turn. The water was clear and cool and the stones 17c. It was a remarkable experience.

When I was done I went back to looking over the grave stones to find specific people I was curious about. In looking around, there seems to have been some surface level change though. Some nearby construction has left some holes and poked around a bit just outside the footers of the old cemetery wall. 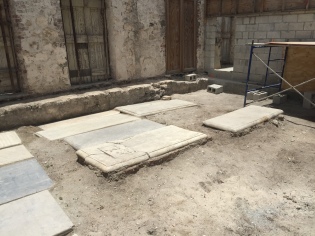 I saw at least four layers including two that appeared to be mostly pavers. The most interesting thing was that this new construction had uncovered a section of the cemetery that had been buried and had had 19c shops atop it. Those shops have been gutted and their floors removed. The result are the most amazingly well-preserved stones in the yard.

Newly exposed stones. The doorways on the right are at current surface level and lead out to the street.

These are mostly of English Jews, some of whom had adopted the stone styles of their Sephardic predecessors. I am told that the development plan calls for all the graves to be reincorporated into the cemetery which will retake its original size. More on the stones later.

Much of the rest of the day was spent at the George Washington house again, this time looking over the artifacts from the 1999 and 2001 excavations. I have the reports and the artifact lists in them, but the only way serendipity can happen is when you let it. The excavations were primarily in the ravine west of the home. The collections span a large period and of course trying to find 1751 in an assemblage is not an easy task.

Once I was done, I thought it would be nice to get out into the countryside.

Looking south from the first major rise of land.

I was right. I drove north mostly by zigzagging the road system. The south has a large sloping plain, so that heading north means heading up as well. As Washington observed, the landscape is made so that views of the sea are to be found throughout. 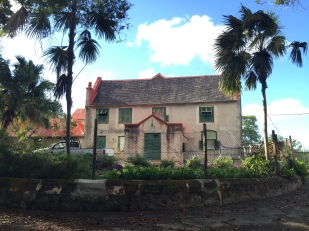 Drax Hall. In private hands and not open to the public, but still owned by the Drax Family in England as it was in the 17c and still producing sugar.

I wended my way up to Drax Hall—a well known 17c plantation and home just about one third up the island from the south coast. Sugar is still grown here in the hundreds of tons for shipment to European markets. Interestingly though, none of the Bajan plantations produce any molasses. That means that all the Barbados rum is made from imported molasses—not local. There is a metaphor for something in there.