Tony Horowitz made famous a certain divide within the Civil War reenactor community–the dived between so called ‘hard cores’ and the rest. In reality though divides were always more complicated and nuanced. This essay from Jesse Marx on Salon.com highlights the divides made more pronounced by the rise and decline in popularity of the hobby–the same sort of issue I wrote about a few posts ago. I was with this group for one event many many years ago, although the membership has no doubt changed three times over. Particularistic units like this face a unique problem that marginalizes them from some reenactor visions. Uniquely uniformed groups help make an embarrassing patchwork that emphasizes the eccentric in place of the common. An event will never have more than a handful of these uniquely uniformed men, and that can never look like a company or regiment as they would have been in the field. So instead you get a surrealistic mix that undermines the attempt at uniformity (within limits) one would have seen on the field. People are attracted to these singular uniforms, but often for simple peacocking reasons and nothing more. Men wearing their best ordinary issued uniforms have a flexible generic quality that better represents what the armies in the field looked like. 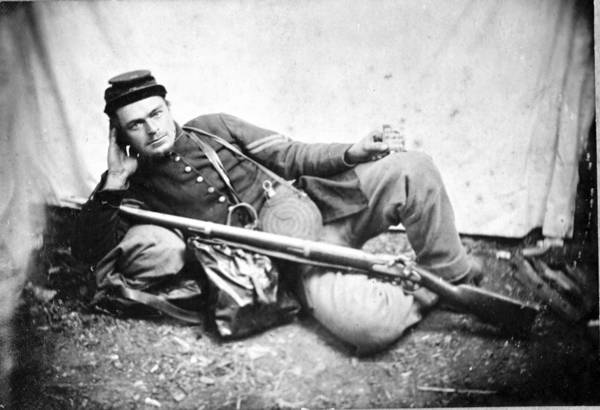 For that reason, so-called ‘hard cores’ long ago adopted a “commonest is best’ approach for most events while sewing specialized kits for rare appearances. Back in my day (the beginning of the ‘hard core’ movement), we used to invoke one man–a Pennsylvanian named Ignatz Gresser–as the model to look to. Apart from his obvious force of character, Gresser was as ordinary as a man could be. Everything he had was plain issue–probably mostly Schuylkill Arsenal–and he is clean and tidy, not shaggy and silly. It was the habit of many Pennsylvania non-commisioned officers to adopt the dress frock coat since regulations allowed only for stripes on these coats, and not on flannel fatigue “sack” coats. No “baseball”  rounded brim, Gresser shows ideal hat posture for a cap made as they were then (and usually not now) and notice the hardtack flare. He is simply dreamy!

The advantage of this approach is flexibility and good representation. A patchwork army of every colorful oddity that may (or may not) have one time appeared on a battlefield was always something we derided. Nevertheless, even through the 14th Brooklyn is an odd place to land for Marx’s discussion, his is a very good one.